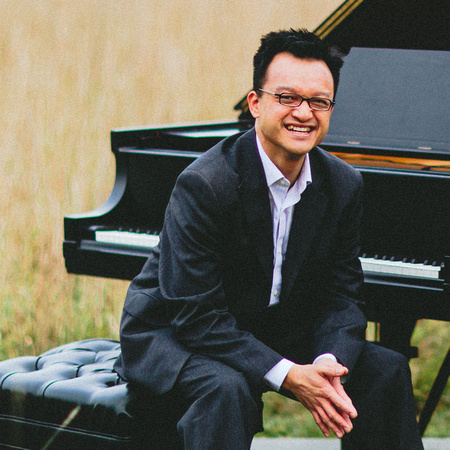 "[Drew's] technical abilities give him access to the demands of the classical repertoire."
(Knoxville News-Sentinel)

Born in Vietnam, pianist and Steinway Artist Andrew (Drew) Le has been hailed as "an impressive tour-de-force...a plenitude of poetic nuance" (New York Concert Review), and lauded for his "consummate piano virtuosity" (Goleta Valley Voice) and his "pistonlike precision" (Mountain Tradition). Drew was the first-prize winner of the 2004 Hilton Head International Piano Competition, and joined the piano faculty at Kent State University's Hugh A. Glauser School of Music in the Fall of 2019. Prior to Kent State University, Drew served for 14 years on the faculty at Hope College in Holland, Michigan. He and his wife, violinist Jennifer Walvoord, are the Artistic Directors of the Chamber Music Festival of Saugatuck.

While at Hope College, Drew founded and directed Holland's popular Brown Bag Series. Passionate about serving the global community, he has also performed recitals as food drives, the last of which brought in close to 600 non-perishable items that were donated to the Holland Rescue Mission. In 2015, Drew performed a benefit concert that raised over $9,000.00, all of which was given to The Reformed Church in America for Syrian refugee crisis relief efforts in Europe.

Drew studied piano performance at the Interlochen Arts Academy and the University of Michigan, and was also a C.V. Starr Doctoral Fellow at the Juilliard School, where he received his Doctor of Musical Arts degree in 2007. His teachers have included Hien Le, Vivian Kleinhuizen, Rich Ridenour, Victoria Mushkatkol, Arthur Greene, Philippe Bianconi, John Perry, and Jerome Lowenthal. Passionate about teaching, Drew's doctoral document explored the pedagogical lineage of Jerome Lowenthal's teachers, including William Kapell, Eduard Steuermann, and Alfred Cortot. Drew was appointed for three summers to the piano faculty of Interlochen Arts Camp's All-State Program as an undergraduate teaching alongside tenured professors. Later, he was selected to be Jerome Lowenthal's teaching assistant at The Juilliard School.

As a photographer, Drew has been professionally photographing weddings, portraits, and events since 2007. Drew is a member of Sony Pro Imaging Support and is a former Getty Images Artist. Exhibitions of his photographic work have been presented all across West Michigan.

Drew released his debut recording on the Blue Griffin label in 2013, and has recently recorded the complete Etudes by Claude Debussy.  He was the recipient of a Steinway & Sons Top Teacher Award in 2016. As a violinist, Drew was a former member of the Holland (Michigan) Symphony Orchestra. Drew has served as Vice-President of the Holland Piano Teachers Forum, and is currently a member of Music Teachers National Association (MTNA), Ohio Music Teachers Association (OMTA), and Western Reserve Music Teachers Association (WRMTA).  Drew resides in Hudson, Ohio with his wife and their two young children.