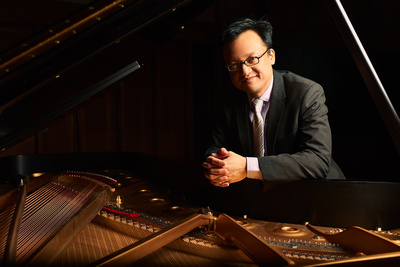 "An elegant recital..Le opened his program with a poignantly introverted account of Chopin's Polonaise Fantasy, Op.61.  He infused the masterpiece with a plenitude of poetic nuance; a structural cohesiveness that nevertheless allowed flexibility within an ongoing narrative; and a necessary dramatic buildup at the end.  I found it a masterly interpretation - individualistic without a trace of contrivance or eccentricity."

"Then came a complete performance of Debussy's Douze Etudes...it would be hard to imagine a more successful version of these cryptic, fearsomely difficult studies...Mr. Le not only made light of them insolently; he infused each vignette with exquisite balance and humor...Le's version [of Pour les huit doigts] whisked past us with Concorde-like virtuosity.  And his octaves...repeated notes, and treacherously skipping chords likewise left nothing to be desired.  Le, I hope, will someday make a new recording of these Etudes: he has this writer thinking of Daniel Ericourt's distinguished early 1960s version: which is high praise indeed."

"Andrew Le's appearance with the West Michigan Symphony brought the season finale to a rousing finish.  Le's performance of George Gershwin's Rhapsody in Blue was refreshingly exemplary.  His sense of improvisation, his playfulness, and thoughtfulness gave the work new life and made it exhilarating.  Did I mention the fabulous technique?"

from Harold Duckett of The Knoxville News-Sentinel (March 21, 2005):

"The dynamic way [Le] took on Earl Wild's rambunctious Fantasy on Gershwin's Porgy and Bess showed that he has a foot in the door of jazz as solidly as his technical abilities give him access to the demands of the classical repertoire...there were plenty of rich, energized jazz rumblings and riffs."

"One had the sense that if Wild had called for the performer to dance on the keyboard, Le would have gladly done so.  It was certainly with much enthusiasm that he pounded the keys with the entire length of his forearm on a couple of occasions."

"Debussy's Cloches a travers les fueilles...rang like bells.  Poissons d'or...captured the essence of gold fish sparkling and flashing in a crystal-clear pond.  Poissons isn't a description of fish so much as it is a delightful capturing of the little flashes of light the fishes' reflections make on the surface of the water.  That's the true magic of the piece, and Le conveyed it effectively."

"Andrew...injected a refreshing youthful exuberance into Rachmaninov's 'Piano Concerto no.3 in D minor.'"

"Pianist Andrew Le wowed the Abravanel Hall audience, and that was only the beginning...Le, a Vietnam-born graduate student at the Juilliard School...sailed through the Bach-Busoni Wachet auf, ruft uns die Stimme, BWV 645. He followed this with a fierce attack on Copland’s El Salon Mexico as arranged by Leonard Bernstein. Bernstein’s version of this somewhat cliched work is infused with genuine passion and fire, and Le played it brilliantly."

"Le sat down at the piano and played...and it became clear why we have to keep plugging along.  Beauty and joy do exist in the world.  There was no doubt in my mind...that Le, a mere human being on this little planet, had indeed made a worthy contribution to the universe."

"Le...has some impressive tools.  His passage work [in Strauss' Burleske] was sturdy and reliable.  He attacked passages lustily when needed but, often, it was the ends of phrases and his releases that were most notable...Le kept raising the bar, playing bigger and bigger until the really big ending...it isn't every day that a local boy comes home and shows he's made good."

"That Sunday afternoon in Flat Rock, an intimate audience sat suspended as Le sensually interpreted the elusive melodies of Debussy Etudes, feet pedaling his small frame backward, fingers striking keys with pistonlike precision; then BAM - his bench collided with the wall.  Sustaining posture without missing a beat, Le's fingers swept over the keys like ballerinas, and then resumed a frenetic tempo."